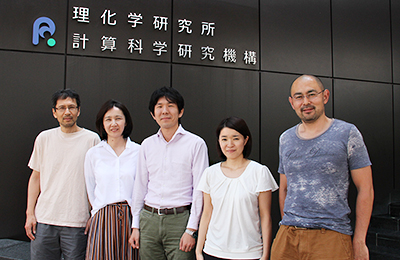 Vegetation models simulate functions of plants such as carbon and water exchanges between the atmosphere and land surface, and play an essential role in climate simulations. However, the vegetation models have large uncertainties. For example, it is very difficult to simulate accurately the dates when the leaves grow and fall. Data assimilation combines the simulation with actual observations, and can reduce those uncertainties.
We developed a data assimilation system with a vegetation model known as the SEIB-DGVM (Spatially Explicit Individual Base Dynamic Global Vegetation Model). As the first step, an experiment was performed at a single location in Eastern Siberia by assimilating satellite-observed leaf area data. The results showed that the growth and decay of the leaves, carbon cycles and the parameters of the tree and grass were successfully estimated. As the second step, the experiment was expanded to multiple locations in Eastern Siberia. The results were promising.

Unstructured finite-element methods are widely used in earthquake simulations for accurate modeling of complex three-dimensional geometry and nonlinear material properties. However, its applicability to large-scale problems is often limited by the difficulty of generating high quality mesh and large analysis cost. To overcome these difficulties, we have been developing robust mesh generators and fast analysis methods in an integrated approach. In this talk, I will show Tera Degrees-of-Freedom scale unstructured finite-element earthquake simulations enabled by using the developed method on the full K computer.

X-ray free electron laser (XFEL) scattering experiments has been described as the future of structural biology. The technique has several advantages, including its ability to probe a single particle sample without the need for crystallisation, and to produce diffraction data before the sample is destroyed by radiation. However, resolving structures from XFEL diffraction patterns can be challenging due to the phase problem. Considering the novelty of the technique, there is also limited data available to provide initial models that fit new diffraction patterns. Therefore, we consider a strategy to provide efficient interpretation of XFEL data by searching them against a database of hypothetical biological shapes to obtain an initial structural model. To build a database of biological shapes, we assemble various three-dimensional (3D) structures in existing structure databanks, such as the Electron Microscopy Data Bank (EMDB). We can then reduce the assembled dataset to a minimal yet distinct set of hypothetical biological shapes. In the first part of this assembly, we present the analysis of single particle cryo-electron microscopy (cryo-EM) structures. Here, we analyse the variation in the shapes that exists within the 3D cryo-EM maps, and within their simulated two-dimensional (2D) projection images. This analysis provides us with the extent to which 2D images of two distinct 3D shapes can be similar, giving us an idea of the expected degeneracy when we compare experimental data to a hypothetical biological shape. In general, we expect that with a sufficient number of 3D shapes will allow us to provide candidate models for new XFEL data effectively.

The number of known planets outside our Solar system has in recent years grown from a handful to a few thousand. Some of these systems have quite exotic planets; such as the recently imaged HD131399 system, which contains three stars and a large planet; and the "Super Saturn"-like ring planet J1407b. In many other systems, the planets are now at locations where they could not have formed, requiring some type of migration to have taken place.
Since most stars form in clustered fashion, the stellar density in their birth environment is relatively high. This makes stellar encounters that could be responsible for such migration possible. In order to get a good estimate of how frequent such encounters really are, accurate modelling of young stellar regions is required. To this end, we create models of observed stellar regions using data from the MYStIX (Massive Young Stellar regions in Infra-red and X-ray) survey and simulate them with AMUSE, the Astrophysical Multipurpose Software Environment. These simulations include gravity, gas dynamics, stellar evolution and binary/multiple stellar systems.
In my talk, I will discuss these models, as well as several other aspects of my ongoing work to simulate these regions, the encounters therein and the possible resulting planetary systems.

Fluid mechanics is the study of fluid flow. It deals with the mathematical modeling of fluid motion to understand the behavior of flow in different scenarios. The motion of a fluid is modeled by the Navier-Stokes (NS) equations. The numerical approach to solving the equations governing fluid flow is known as Computation Fluid Dynamics (CFD). As NS equations model the flow of a fluid isolated from other medium (such as a solid), typically CFD has been used to solve problems involving simple geometry (modeled as boundary conditions) and idealized flow conditions. A realistic scenario of fluid flow almost always involves flow of a fluid around complex geometries, be it man-made (such as a vehicle, urban environment, etc) or natural (such as birds, fishes, etc). One of the techniques of numerically modeling interaction between fluid and solid/structure with complex geometries is the immersed boundary method.
Immersed boundary method can enable numerical simulation of complex systems in engineering and biology to enhance our understanding of these systems.
The challenges, advantages and limitations of immersed boundary methods in the context of HPC will be presented. And, applications of immersed boundary method in engineering and biology will be discussed.